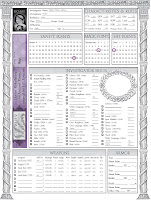 As is often the case in large empires the lowest quarters house the most ancient profession, Rome is no different; behind sprawling back alleys, in the most decayed, retched dens of injustice this trade prospers. In one such hole a Gaulish woman provides her earthy delights to a moderately wealthy Jewish tinker of religious artifacts.
The Jew, immediately feeling extreme loathing for himself and the woman, quickly leaves never to be seen again. Unknowingly, or perhaps uncaring, he leaves the woman with the early seeds of life in her womb, the very spark of life that will become Publius Fabius Albinus.
Born in Rome Fabius often found he was being dragged along behind his mother in search of new profit making schemes. Like a sponge he quickly began to understand the value of information, and not unlike a sponge in the myriad of bath houses of the empire he learnt much from the incessant chatter of his mothers clients.
Trying to raise him properly Fabius’ mother faced insurmountable odds in abject poverty, the kind of odds that not even the most uncared for slaves can imagine, but somehow she managed to shift the focus of her trade to the the more prosperous echelons of Roman society, often with Fabius in toe. In this fashion she was able to accumulate a small amount of wealth that would eventually drag them from the rudimentary hollow slab of stone they called home into the very tar-paper tenement that Fabius now resides.
The thought of having a roof over their heads lessened his mothers determination to rise above the throbbing scum of Rome, she quickly fell into a despondent haze and eventually gave up all hope. Fabius then 12 year old felt the darkness that was covering them and suffered many nights of worry. One such night he watched his mother fade into the shadows of the hall and out of his life forever.
Left only with his friends, the street urchins, a rat named Herman who he loved like a brother, and his newly (happily) married neighbors, Spumantius and Stella, he began to thrive and develop his own set of standards and life rules.
A shabby unshaven ruffian emerges from the shadows of the darkest hole in Rome's notorious underworld to join the adventure of a lifetime.
Posted by Furt at 1:31 PM