Here is a video demonstrating a turn example in Blood on the Sands.

I've been meaning to make a Youtube video for a while now to help those who are undertaking play testing of Blood on the Sands to get started. Well I thought I better give an introduction of the game before I launch into a more detailed explanation of rules mechanics. Anyway, if you fancy a chuckle at someone attempting to pronounce Latin terms when they can barely speak English - the Blood on the Sands "movie" should be right up your alley! I'd love to hear what anyone who manages to sit through this thinks.

Blood on the Sands Playtest

I had the opportunity to run a couple of play test games of Blood on the Sands for an old friend, Damian, and his good friend Ed. I met Damian years ago (probably 8-9 years ago) thanks to Blood on the Sands, when he reached out to me asking for a game. Damian and Ed are both Roman reenactors and it was great to be able to pick their brains on a few subjects. Thanks to Damian for being such a gracious host; for the wine, wolf nipple chips and the authentic Roman eating couch!

We had two very different matches. The first between a Thraex and a Murmillo, that saw Damian's Thraex suffer a devastating deep wound to the torso in the first exchange, which his poor gladiator wore for the rest of the match. The Thraex put up a good fight, considering his wound, but failed to land a blow on Ed's giant German Murmillo. The Murmillo hunted him relentlessly and eventually ended the match with a slow kill wound to the Thraex's torso for a second time, but he was spared by the crowd and granted missio.

The second fight was between two Provocators, one large and a Son of Pluto to boot, meaning his blows would hit home much harder and the other was agile making him harder to hit. The arena was scattered with training posts. Damian had a much better run in this combat and the Provocators danced around the obstacles trying to corner each other against them. At one stage Damian caught Ed's gladiator against a pole and delivered many punishing attacks against him, which severely fatigued Ed's gladiator. In the end this is what ended the match as Ed's Provocator could stand no more and had to submit exhausted. The fickle crowd shouted for his blood and he was put to the sword.

A great afternoon gaming with great company to boot.
I am happy to say that play testing is progressing very well and this time around I've actually gotten the rules written comprehensively (in my opinion) and as good as complete. I believe Blood on the Sands has evolved into a game that is easier to learn and much more accessible, while keeping the core of what I wanted the game to be all those years ago. 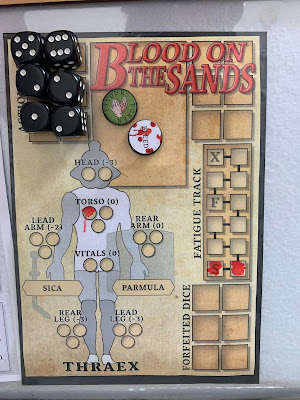 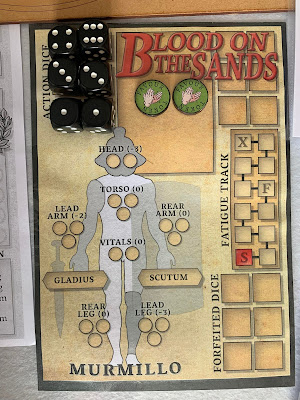 Blood on the Sands 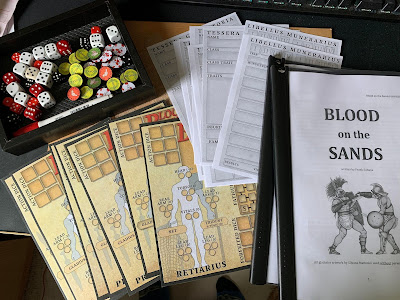