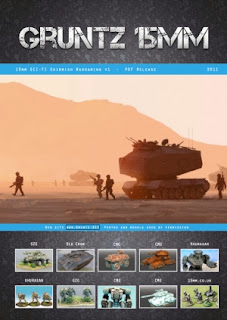 I've always planned to do some 15mm Sci-Fi wargaming (amongst a dozen other wish-list projects) and have spent a lot of time looking for prospective rules, miniatures and vehicles. There is a very broad range of  excellent manufacturers available at the moment for this genre and scale, and players are really spoilt for choice when it comes to choosing figures for their armies. The same applies to rules of course and after having scoured countless pages, blogs and groups on the subject of Sci-Fi skirmishing, a set of rules that really stood out for me was Gruntz 15mm, by Rottenlead Publishing.

Gruntz 15mm was designed from the ground up to be a fast play skirmish level wargame using combined arms, designed specifically for 15mm (obviously - derr!). You can use miniatures from any 15mm SCI-FI manufacturer and although the rules provide their own background setting, you are not restricted to that either. You can learn the basic Gruntz rules quickly with the option to add more advanced rules, including turn sequence and alternate activation later.

I quickly succumbed to my interest in the game and bought the Gruntz 15mm PDF and was immediately blown away by the high quality of the product. The rules were written by Robin Fitton, a passionate, independent, UK game designer, whom, from what I can gather, produced these rules, literally out of his garage. For an individual to produce something of such a high quality is absolutely amazing. Hats (or rather re-breathers) off to Robin.
While visiting the Gruntz 15mm Yahoo Group, I learned that Robin was offering a few hardcopy versions of his rule book to those willing to write an honest review of it. Being truly impressed with his work already, and fancying a shiny book, I happily volunteered. My following comments and thoughts therefore, are not a review of how the rules play, but my observations of the product as a whole. Please note, I have yet to actually play Gruntz 15mm, although I've read fully through the rules twice now. 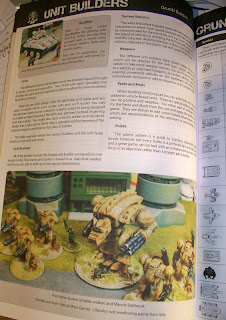 After receiving my copy of Gruntz 15mm in the post, I was really surprised and bowled over with the overall quality of the book. The glossy cover makes quite an impact and is really quite beautiful and appropriate for the genre, putting some big name published rule books to shame. It has the sturdiness to survive the rigors of tabletop gaming as well, along with the odd chance someone might try to use it as a coffee mug holder - names withheld! The book runs at 136 pages in total.

The art is not just limited to the cover. The book is lavishly dotted with really nice professional  artwork and images throughout - in glorious colour. The mech art of Jake Parker I found particularly good. As well, there is a plethora of beautifully painted miniatures on display, from a whole range of 15mm manufacturers including GZG, CMG, Khurasan and Old Crow. These are shown mostly "in play" against skillfully crafted terrain, that really shows off how good this scale of game can look. 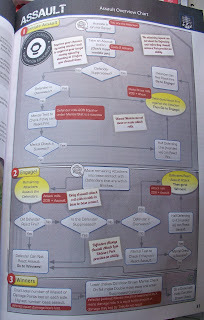 The rules themselves are very well written and easy to understand, with a consistent flow to them. Everything is clearly labelled and fairly easy to find, helped by a good table of contents, although I would have like to see an index, something a lot of rulebooks seem to omit. Tables and charts are well presented, are clear and easy to follow. A collection of diagrams, that go a long way in demonstrating things like Movement, LOS and Shooting, makes use of simple but effective symbols to represent the different unit types. Another touch of genius are some flowcharts, that do a great job of explaining certain aspects of the rules like Activation and Assault. I liked the layout of the flowcharts so much I may have to steal borrow the idea for Blood on the Sands. The rules section of the book run in at around 40 pages. 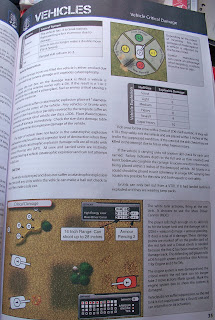 Another large section of the rules details the Unit Builder. This is where you get to stat out all those lead goodies you have just bought. This for me is the strength of Gruntz. I hate being told to buy a certain type or range of models and these here are the stats for said models. I like to tweak things, and not in a munchkin kind of way, but purely to get the look and feel of the forces I want to field. I have read that the Unit Builder rules could be abused in the wrong hands and they would not suit tournament play, but that's of little concern to me or my group. The Unit Builder does seems a bit heavy at first, but with closer examination, things are quite well organised and clear cut. There is every possible Sci-Fi unit included here that you could ever hope to put on a table, from VTOL's, mechs, tanks and of course grunts. the Unit Builder section runs at about 35 pages.

The last section of the book cover the Heliopause "fluff", Robin's own background universe, which I thought I would have little interest in. This is really nicely written and quite good actually and I plan to steal some bits from it when I get my own game world up and running. Each faction has a little "Visual Profile" showing the uniform worn and the Faction's symbol, which is a nice touch.The Heliopause Background is about 30 pages long. 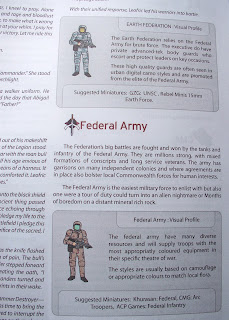 All in all I am really impressed with Gruntz 15mm and can't wait to give it a go. Living in Australia, I rarely have the luxury of purchasing hard copy rule books, opting for PDFs nine times out of ten, to avoid ridiculous postage costs. Rules that are print worthy I then get printed out at my local Officeworks, but only ever in black and white. I'm glad I had the opportunity to see Gruntz in all her glory.

More info on Gruntz 15mm can be found on Robin's own blog http://www.gruntz.biz. He also has a nice collection of YouTube videos here, that including some informative AARs, that serve as great tutorials for playing Gruntz 15mm, and some really good how-tos and painting guides.

Gruntz 15mm is available from Wargame Vault in PDF form for $14, hardcopy (soft cover) for $29.06 and PDF+hardcopy deal for $33.56. The softcover price does not include postage and handling costs. Also available is a desktop program called Barracks for $5, again available from Wargames Vault. Barracks takes the hard work out of creating Gruntz units and makes a nice Unit Card to boot, with the ability to add your own images.
Posted by Furt at 11:10 PM 3 comments

Blood on the Sands - Counter Example

Just a quick post to say that work is continuing on Blood on the Sands. Dr Mathias (Matt Leahy) has completed the last components of the game for me - the counters.
Without Matt's help the game would be truly a different experience! Thanks again Matt.

Your comments would be appreciated.