I finally completed the Old Glory Pathan horsemen last night. We have been using these guys in various states of completion for many months now. After receiving a large parcel of even more cavalry, I thought it prudent to complete the ones I'd already started. It is satisfying to finally have them finished, plus, Dave is terrified of cavalry, so this bunch are worth their weight in gold!

Although they aren't the best poses, they are pretty nice. There are a couple of duplicate poses which are a little obvious, but mixed in a bunch they blend better. The horses are all individual, and there are some really nice poses amongst them. I really like the figures in the poshteens the most, but they sport two swords, or a curved sheath for a straight drawn sword, depending on how you see it. That's Old Glory for you. A couple of these guys also have modern rifles, a little out of period for what we are doing but really unnoticeable on the table. I've painted one horse black and his rider in red, should we need to nominate a leader amongst them. (Click the images to enlarge)

We played our second Sharp Practice game last Sunday. All in all it was very enjoyable and we had a great laugh. The game is lighthearted and had many a memorable moment. Dave, who played the British compiled an after action report. What follows is a letter from Captain Charles Chase of the Honorable East Indostan Company to his dear Mother. (Click the images to enlarge)

________________________________________
11th August, 1757
Dear Mater,
The weather here continues to be beastly. I asked one of my servant chaps when I first arrived if it ever rained and he responded that it does on occasion. That was 5 months ago. All it has done since is rain! I am dictating this letter to one of my lieutenants, as I am currently trying to scrub myself clean. But more about that soon.
Recently we had a break in the weather and headed up into the mountains to hunt down a rebellious Nawab and his vicious ungodly bunch of savages. After a pitched battle they took to their heels and I was ordered to give chase. Our General has a peculiar wit about him, “Give chase, Chase!” which he found somewhat amusing. Immediately, myself, with two lieutenants, two sergeants, 40 men of the 5th Company of Foot and 20 men of the 2nd Company of Grenadiers, as well as a small cannon manned by engineers, gave chase. I’ll never live that down will I… no don’t write that down, never mind.
In column formation we marched further into the hills in hot pursuit of none other than the renegade Sepadar, Ali Harshit. He and his men were running for a village, beneath the fortress of Noghul. I knew our native cavalry was keeping his horsemen busy so focused on mopping up his fleeing men. No sooner had we entered the field though it was apparent our cavalry had let us down as waves of Indostani Horsemen were seen riding from cover on the right flank. Immediately I ordered to form square, keeping Sergeant Nobbs under my watchful eye, as I had been warned about his drinking and habit of cut and run. I saw no evidence of either, this day, but he did sway a lot, apparently due to his thin frame catching the breezes. Or so he says.
Sergeant Pat McDoodle, a strapping chap from the Highlands took charge of a squad of Grenadiers and acted as skirmishers drawing off and decimating a force of cavalry. Meanwhile in my rear, was Lieutenant Sutton and Willy Uppem, both with squads from the 5th Company and the grenadiers, who acted as a guard for the engineers, protecting them from a second group of horsemen. Sergeant McDoodle did an excellent job, so I ordered the 5th into line. Meanwhile the native chaps were still fleeing into the village.
As we were about to advance, Willy Uppem’s hat flew off, and so he made a dash forward to grab it. Unfortunately the entire line of the 5th reached it first and it was squashed terribly. While he was trying to retrieve his hat and bend it back into shape, two of his grenadiers were struck down by something they must have ate the night prior and were seen to be clutching their stomachs and rushing a stonewall. We must see to it that the men stop nibbling on native fancies. It obviously doesn’t agree with them. Once he had reclaimed his hat, Uppem then had to retrieve his wayward men. Fortunately they weren’t too far away.
The native horsemen attacked us in the rear at about the same time, causing Lieutenant Sutton and his men to flee and jeopardizing our cannon and its crew. The horsemen rode straight past, concentrating on the fleeing Sutton and his men. This gave the crew a chance to fire point blank into the cavalry, killing one outright and grievously wounding their leader, not to mention scaring the rest of them off. However, while all this was happening, my gallant lads and I in the center were once again in hot pursuit. I don’t want you to be alarmed, mater, but I was wounded in the advance, twisting my ankle as I tried to avoid something one really must want to avoid, alas…I didn’t avoid it, hence why I’m dictating and on my third bath.
This minor mishap however allowed the enemy to escape us and get safely into the village proper. Their jubilation however was cut short when one of their chaps, firing either at us or in the air, one can never tell, set fire to the roof of a nearby hut. So as we retired away from the village and looming fortress walls, there was rather a lot of smoke, flame, and excited running around, going on within.
Alas a defeat but we didn’t lose many men and from the glow of the fire emitting from the village, they’ll have their hands full for a while. I look forward to my next meeting with Harshit and I will personally make sure he doesn’t avoid the thing, one must avoid.
Give my regards to Pater.
Yours Sincerely,
Captain Charles Chase
East Indostan Company


Here are some photos of the action. I took a lot more, but many turned out very bad. These were the best, and in my opinion, barely acceptable. I will try to improve my photography  skills before the next game.

Ali Harshit leads his men in flight for the village 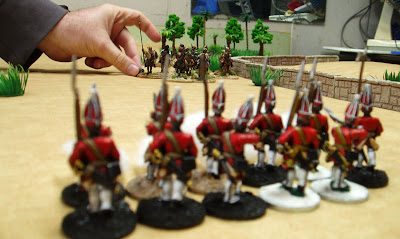 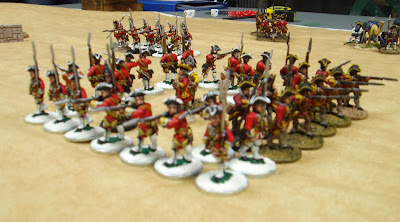 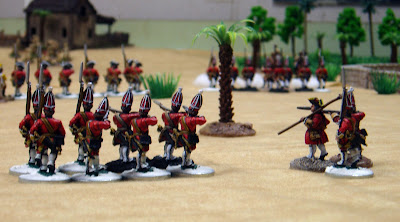 Uppem retrieves his wayward men - "Pull up those pants!" 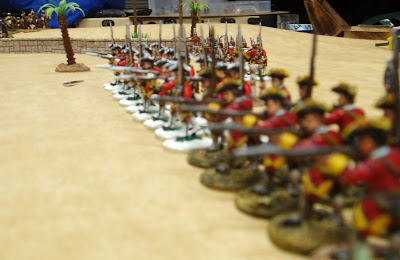 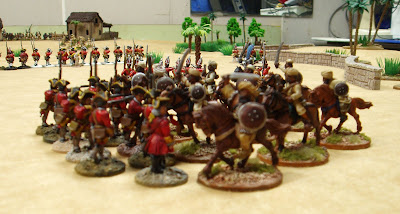 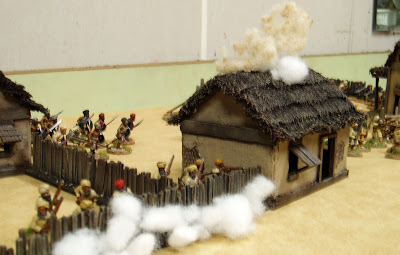 Harshit's men safe in the village (complete with burning hut)

A post on the blog, Adventures in the Indies, reminded me of our tiger. What would a game set in India be without a tiger? Here is a Foundry one from their BSBRV1 Tiger Hunt set. To accommodate this figure into our game I have tweaked the Sharp Practice random events to include a tiger. Should be a nasty hindrance (or worse) to some unsuspecting victims. This is one of the things I really like about Sharp Practice - the ability to have these little events happen that really make the game. Now tell me, who wouldn't want their little lead men  to be mauled, dragged off into the bushes and eaten by a tiger? (Click the images to enlarge) 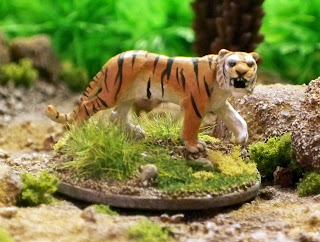 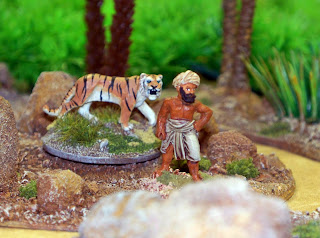 "Where has that thrice cursed, flea bitten, goat gotten to?"

I finished some camels from Castaway Arts yesterday. The pack camels are from TR8 Camel Caravan and the other two are TR9 Kneeling camels, unsaddled; both are found in the Baggage/Transport section of the web page.
They painted up nice enough, but what I thought was the hardest part was positioning the cargo on the camels. A quick email to Gerry at Castaway Arts pointed me in the right direction though. The camel caravan comes with a driver and guard, but I am unsure whether I'll use the driver at this point. I really like these camels and they will fill a very useful role in capture/escape scenarios or just good to spice up a scene. Although a little expensive, Castaway Arts have some really nice miniatures, and have always been very helpful. I have no problems recommending them - plus they're Australian! I have my eye on some of their beautiful pack mules next. (Click the images to enlarge) 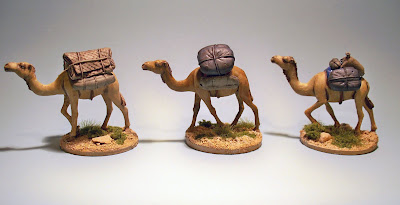 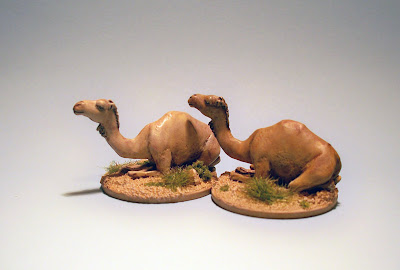 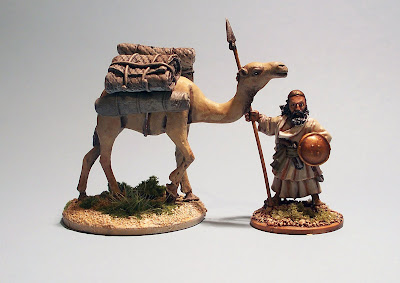 A Pathan and his camel
(Foundry 28mm for comparison)

Here is Dave's first British artillery crew. Both the gun and crew are Front Rank and part of their Jacobite Government range. They were commission painted, but I can claim that I at least painted the gun. British might grows, albeit slowly.
The gun does look a little inadequate compared to some of our Indian ones, but you know what they say a large gun makes up for ;). (Click the images to enlarge) 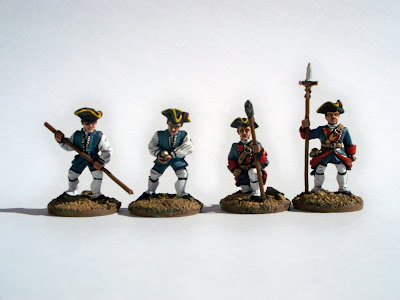 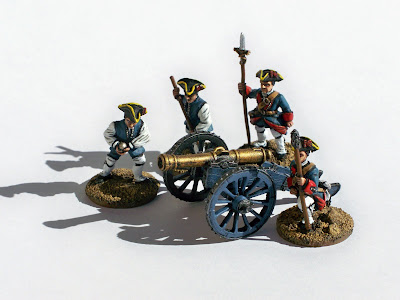 Today I finally finished some more huts I have been working on for quite some time. Six in total, they include some that are a new improved design, including shutters and removable doors. The majority of them are for a swap in the States, but I'll be keeping two for our own table and as examples when I make more. Now if I can just improve that ground sheet! (Click the images to enlarge)