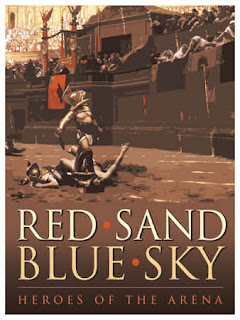 Having been alerted to a new version of Red Sand Blue Sky by Two Hour Wargames over at Hetairoi Wargames, I thought it was about time to pick up this gladiator ruleset. I had always wanted to try the original Red Sand Blue Sky, but had never gotten around to buying it, so I finally took the plunge. To ease back into gaming, Dave and myself gave it a bash last Sunday after printing out the PDF and some character sheets.
The cover looks really good with a simple spin on the Pollice Verso painting, but it was nice to see some effort here - simple but effective. The layout of the rules were a little hard to follow in places, especially since the meat and potatoes of the combat lies in a half dozen or so tables at the end of the book, which had me flicking furiously between the front and the back. As well, I think the character sheets could be vastly improved and be used as more of a tool to play the game. One thing I really liked though was the combat examples provided and available on the site, which helped a lot.
I found the movement rules to be a nice change from the norm, being a little more abstract rather than exact measuring or hex use. They put you in a roundabout area of the arena, like in the center or up against the walls.
There was a decent selection of gladiator types, but apart from the Retiarius they really felt too similar. We also found that their was very little separating our gladiators stat wise, but in the rules defense we were playing fighters of exactly the same skill.
Unfortunately,  concerning combat, RSBS seemed to fall into the same trap that many gladiator games do, where the game degenerates into a dicing rolling fest between two static miniatures. So much hinges on your bonus dice  and choosing when to use them is a big part of the game, but there was nothing stopping me from using all my bonus dice in  the very first exchange (nothing except the fact that if I didn't beat my opponent in that single attack, he was sure to win). Using all your bonus dice leaves you spent , basically out of the match. I think the combat came across as a little lackluster and didn't force me to make any tactical decisions or even basic choices.
In saying that, I think RSBS could excel as a solo game and also has some promising campaign rules. Unfortunately it is not exciting or competitive enough for me as a multiplayer game. I expect tension and excitement in a game of gladiatorial combat and I certainly didn't feel it here.
We did have a lot of fun though rolling up our gladiators. All Dave's hopes hinged on  the murmillo, "Spandex of Gaul", but he was no match for my thraex, "Titius the Jew".
Alas my quest for the perfect set of gladiatorial combat rules continues.
Posted by Furt at 10:19 PM 3 comments

Our small gaming group suffered a terrible loss on the 5th of March, when Adam, affectionately known as "Rotary" passed away while scuba diving. His death has come as such a shock to Dave and myself and his passing will leave a huge hole in our lives. Suddenly our group of three old gaming friends has been reduced to just two, and it will be hard to push lead around for some time to come. My initial response was that we could not possibly game without him, but I guess we owe it to Rotary and our selves to try and get back on the horse. Rotary was such a private person that posting an image of him on this blog seems inconsiderate and wrong, so I got out some miniatures and put together a little street scene in his honor. It's not much, but it is a start to gaming without him around, and has gone far in helping me out of this dark rut. His favorite cap will take pride of place by our gaming table, to remember us of his tenacity and unorthodox tactics.
Goodbye Rotary old mate - we will miss you.