I've scoured the internet over the last couple of weeks in search of images of 28mm scale arenas and have found quite a few nice ones. Some are complete arenas including everything from the arena floor to the seating, the best example of which is the mythical, Dwarven Forge Arena.
This has to be the ultimate in miniature arenas out there - but it's not commercially available and probably never will be. One can only image the cost of such a piece, which includes removable seating, so that the cells, rooms etc can be accessed under the bleachers. When all is said and done, a beautiful arena, but is all of this necessary for a one on one combat game? I shall continue to drool and dream though.
The second type of arena is one that includes the walls and fighting floor only, a good example of which is TerranScapes'.
This type of arena is a little more practical in its design. For one, all the unnecessary bits have been omitted and you are left with the bare bones of a fighting pit, which is really the only thing required for these types of games.
The last type is a simple hex map to play out your combats on. There are plenty of these commercially available, the best probably being EM4's Ludus Gladiatorus game, because it includes rules, the hex map and gladiator miniatures to boot!
In the past our group played our games on a similar hex map and although satisfactory, it leaves a lot to be desired if you want a visually good looking game.
After pondering all these different things and scratching my head over design and construction issues, I decided on a style of arena to make.
The first step was deciding the type and although I'd love a complete arena, tiered seating and all, I decided against it. Construction was the main problem, followed by storage and lastly playability. So I opted to make  the second type, the fighting floor and walls only, omitting the seating and editor's box etc. In my opinion everything above the wall enclosing the arena floor is eye candy, who wants to fight in an empty stadium anyway - I'm NOT painting 100+ spectators!
Secondly I decided on the shape. I chose an oval arena, which I believe is more historically correct and is visually more appealing to me.
After a lot of deliberating I got to work, having figuring out just how I would construct this thing. A visit to the local hardware store helped me choose the materials and I returned with some MDF sheets and pine timber. I have access to a good range of hand and bench power tools, which were needed for my design. I constructed a simple frame from the timber and mounted it to the heavier MDF board and next cut long flexible strips from the thinner MDF board in a bench mounted circular saw (very dangerous). Using a couple of countersunk screws I attached the flexible strips within the frame, giving me the curved bends of my arena. (Click images to enlarge)
With some simple carpentry my arena began to take shape. Next I set to work on the hex grid arena floor.
Posted by Furt at 10:01 AM 2 comments

Those who are about to die...

About 10 years (yes really 10!), coinciding with the release of a little movie called Gladiator, I begin collecting my own stable of Foundry gladiators and with a group of roleplaying buddies lived a couple of months as a lanista, playing out our fantasies on the tabletop.
I have always liked gladiators since I was a kid (Do you like movies about gladiators?), there is just something about their armor and weaponry, the mystery surrounding the men and the one on one combats that really does it for me. So I can't blame my fascination wholly on the movie. Since though my gladiators have sat in a GW case gathering dust, rarely seeing the light of day. That is until I started watching this. 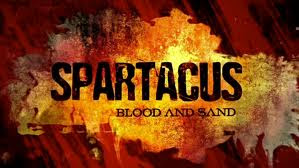 At first I thought what a load of rubbish, a total rip off of every sword and sandal movie ever made , with a heavy dose of 300 thrown in for good measure - but something happened. After cutting through all the crap, this thing actually started to grow on me.Yeah so it's not historically correct and sometimes the combats are laughable, but behind it all are gladiators and for me that's what its all about. The armor and weapons at least appear authentic enough, even if they are being used by leaping Adonis'.
To cut a long story short (or shorter maybe?), I've been influenced AGAIN by the media to start another gladiator campaign. Warranted it is something I've always wanted to do again, I just didn't think it would be now. Fortunately I have a lot of good miniatures already and have been dieing to round them off with Crusader's beauties. One thing I always regretted about our old games though, was the lack of any real arena, we just played it on a flat hex-grid. I endeavor to fix that. Work has already started on an arena, pictures are soon to follow.
The good thing about gladiator type games is that they can be played as fillers around bigger games (like our Sharp Practice Indostan campaign), when time is a little tight or no big game has been prepared.  It is an easier thing to crack out the arena and have a couple of bouts. Stay tuned.
Posted by Furt at 2:12 PM 1 comments

I have uploaded a pdf of my custom Sharp Practice deck for the Indostan campaign. They have a SYW feel with an Indian twist.
I print the Nationality cards on red (British) or orange (Indostan) paper, as well as using colored paper for the card backs.
I hope someone can find some use for them, or at least inspire them to do their own custom cards. I always find this is a really good way to study the cards and put a personal touch in.
Download them HERE.
Posted by Furt at 11:08 AM 6 comments