For the benefit of the playtesters (and anyone else interested) I will endeavor to post here an example of combat for Blood on the Sands. Firstly I’ll introduce our two combatants and show in detail the relevant placement of counters on their play sheets.
The match will be fought between a murmillo, Marcus, and a thraex, Titus. 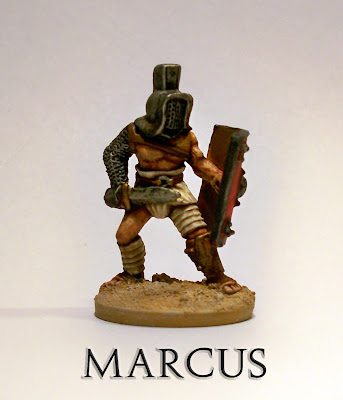 Marcus is more experienced (Prowess of 4) than his opponent and both stronger and sturdier (Strength and Stamina of 4). His attributes are marked with appropriately coloured counters. An armatura sheet representing the armour of a murmillo is placed in the box provided. This sheet lists the difficulty to wound particular areas of Marcus’ body and will also be the place where any wounds will be recorded. The heavy scutum a murmillo wields increases the difficulty of his Speed tests to 5+ and a counter is placed here to remind the players. 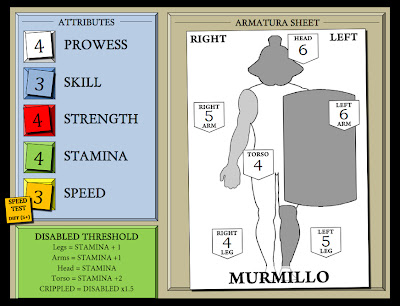 Along with the scutum, Marcus wields a gladius in his main hand. Weapon counters are placed in the appropriate hand boxes. Although a solid defence, his scutum will cause him to tire after time. A fatiguing shield counter and two hourglass counters are placed in his fatigue box to represent this. An hourglass counter will be removed each turn, after which he will start to feel the load of his shield weighing on him. Let’s hope he has dispatched his opponent by then. Fresh from a recent victory, Marcus, has accumulated a fame counter which is placed in his crowd favour box. The crowd begin on Marcus’ side and he may use their cheers to spur him on. Lastly, Marcus considers himself spurned by the goddess, Fortuna, and considering he is a gladiator, he may just have a point. He has the “Unlucky” trait and a counter is placed to remind both players of this. His opponent may force Marcus to reroll any dice roll once during the match. 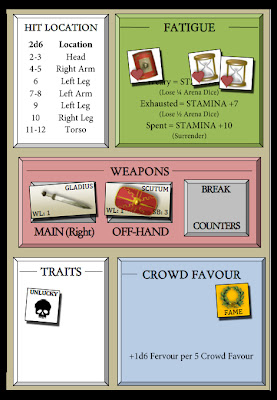